I got this bricked tablet from my friend @Sirpoot. The tablet was bricked because he tried to flash it from Windows 8.1 to Android. The tablet refused to boot up and no sign of life when you press the power button.

First step is to gain access to Raspberry Pi via ssh. You can refer to this excellent blog post on how to do so.


Second step is to open up the tablet and gain access to the flash chip. You would have to pry open the metal shielding after opening the back cover of the tablet. Once you do that you could see the Intel CPU and the flash chip next to it.

Third step is to connect the SOIC test clip to the raspberry Pi. For this I referred to this blog post.

Fourth step is to identify the flash chip using flashrom.

This is necessary to confirm the previous steps are done correctly.

Fifth step is to read out the contents in the flash chip. You may want to skip this step if you just want to unbrick the tablet and not keep the existing contents of the flash chip.

Sixth step is to upload the correct BIOS in the flash chip. For Onda V97w I used this v975w_v3_WinBios-0926.rar to unbrick the tablet successfully. Just replace the "X98_Air_II.bin" file with the firmware you downloaded.

Finally, after a few minutes you will see this. 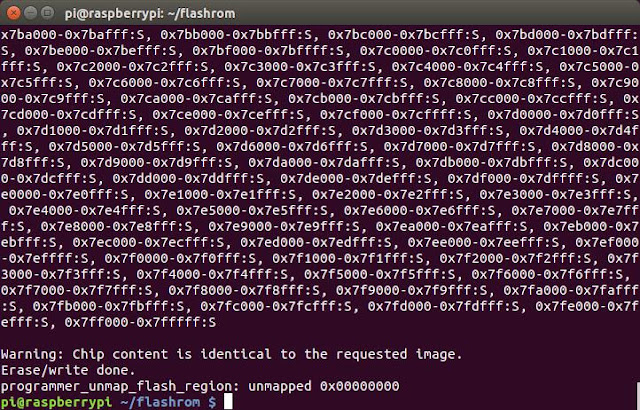 You can power up the tablet and see if it is unbricked :)
I have left out details like how to install flashrom in Raspberry Pi and Flashrom cant detect the chip.
Just post a question if any I will try to help.

Do leave any comments or questions.
Posted by ABC at 5:44 AM 3 comments: