In this post, I will be sharing how C++ classes are constructed and its members are accessed.

Assumptions
The example code has a single class. Member functions in the class are all static. All the objects created from the class are stored in local variable and not in the dynamic memory (Heap).

Let me begin with this C++ code:

Analysing the compiled version of the above C++ code
Let's look at the main() of the binary. 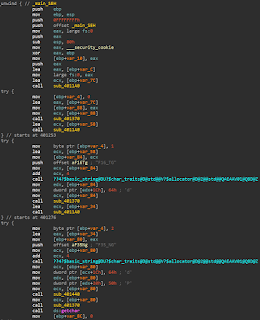 This is the constructor of the "Fighters" class. 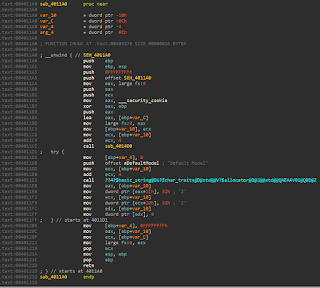 3. Rebuilding the Class structures using Struct in IDA
The ECX register is passed into the constructor function from the caller. ECX contained the "This" pointer. The "This" pointer value is then stored in the local variable "var_10". Next you will observe how values are stored into offsets from "var_10". At this point it would be useful to re-create the struct of the objects of the "Fighters" class.
To do so we can go to View->Open subviews->Structures or Shift+F9

Given the offset values and the types of data being initialized at the various offsets.
We will then create the structure of the "Fighers" class as shown below.

We can compare the struct to the "Fighters" class definition code as shown below.

4. Understanding how the member variables are accessed in an object.
We will apply the struct offsets to the constructor by Right clicking on the offset and choose "Structure offset".

Next we can go on to label the offsets in main and other member functions of "Fighters" class. 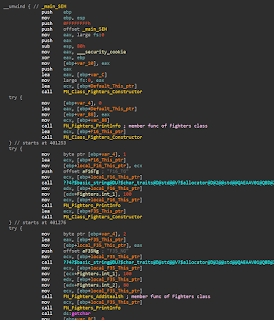 After labeling the offsets and member functions we can have a better understanding of how the members of the class are accessed.
Posted by ABC at 2:01 AM