In this post, I will be sharing how a key concept in OOP; Polymorphism. I will also share how to identify Virtual functions.

Key takeaways:
1. Identify the differences between static and virtual functions.

Assumptions
The example code only has a single class and one child class. Both parent and child classes has one virtual function on top of the static ones.

Let me begin with this C++ code: 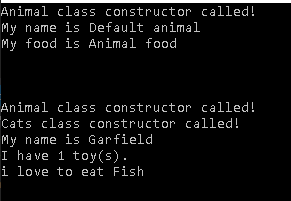 This demonstrate a key concept in OOP, Polymorphism.

Next is the "Cats" class with 1 public variable "toys". It also have constructor and destructor functions. "Playing" is a member function implemented to interact with the "toys" variable in the object of "Cats" class.

Inside the main function, an object "Generic_Animal" of type class "Animal" is created. And its member functions "Naming" and "Eating" are called. Then an object pointed by "pCat1" of type class "Cats" is created. The variables "name" and "food" are overwritten with different strings for the object. Finally, the member functions "Playing" and "Eating" are called. 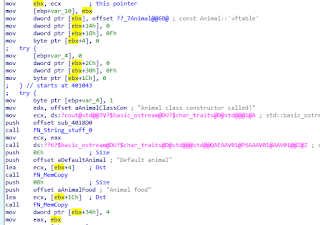 Now we will construct a struct to represent the members in "Animal" class. Take note how the start of the object will be pointer to the Virtual Function table (Vftable) if a virtual function is present.

I will skip over the constructor and struct for "Cats" class. However, if you need help just leave a comment below.